There are some recipes that are meant for sharing. The kind that make the perfect dinner on a cold winter night. The kind that I’d cook for you if you were coming over.

So, I’m pulling four of our favorite soup recipes out the archives to share with you today…like these chicken and dumplings that have been my daughter’s favorite meal since she was about five years old.

It was so good. I’ve also started cutting the biscuits into eighths instead of fourths because we like to go heavy on the dumplings. You can make the dumplings gluten-free with Gluten Free Bisquick.

I think most of you have probably seen some version of the Bean Soup or Taco Soup recipe that’s been around for ages. I love this soup because it’s so easy to make and so full of flavor. I think the secret is the ranch mix.

And, then there’s this CopyKat version of Olive Garden’s Pasta E Fagioli.

Oh. My. Goodness.  I’ve used gluten-free noodles before and it tastes just as good. 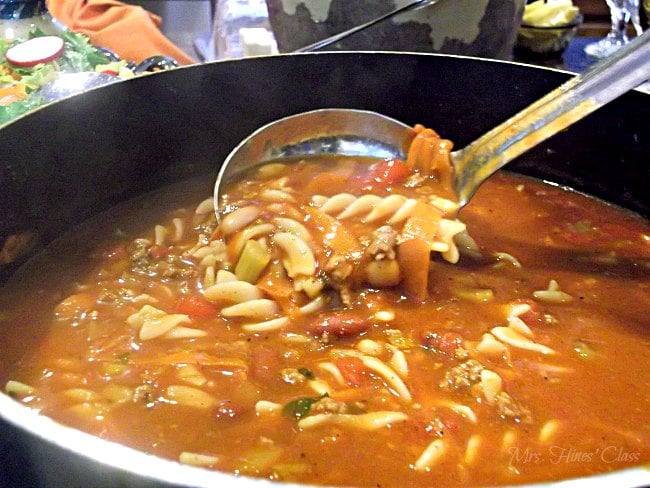 Just thinking about it makes my mouth water.

Now, there’s some debate about chili. Some say it’s a soup and others claim it’s a stew. Either way, we love my chili.

Since being put on a FODMAP friendly diet, I’ve had to adapt the chili recipe, no longer adding beans and removing the garlic and onion once it has been sautéed. My family and I actually like it better this way.

I hope you will enjoy these soup recipes as much as we do.

See you in class,

Easy conversation and simple living ideas straight to your inbox

Sharon E. Hines is a participant in the Amazon Services LLC Associates Program, an affiliate advertising program designed to provide a means for sites to earn advertising fees by advertising and linking to Amazon.com

Sharon E. Hines uses cookies on to personalize content and ads, to provide social media features and to analyze traffic. I also share information about your use of our site with our social media, advertising, and analytics partners who may combine it with other information that you’ve provided to them or that they’ve collected from your use of their services. Cookie Policy

Ordinary moment no. 10 - The Fire Hydrant and the

Tap the link in my bio for more info -> @sharon_e_

Ordinary Moment #52 (There is no real list, I'm ju

I want to encourage anyone who felt like the black